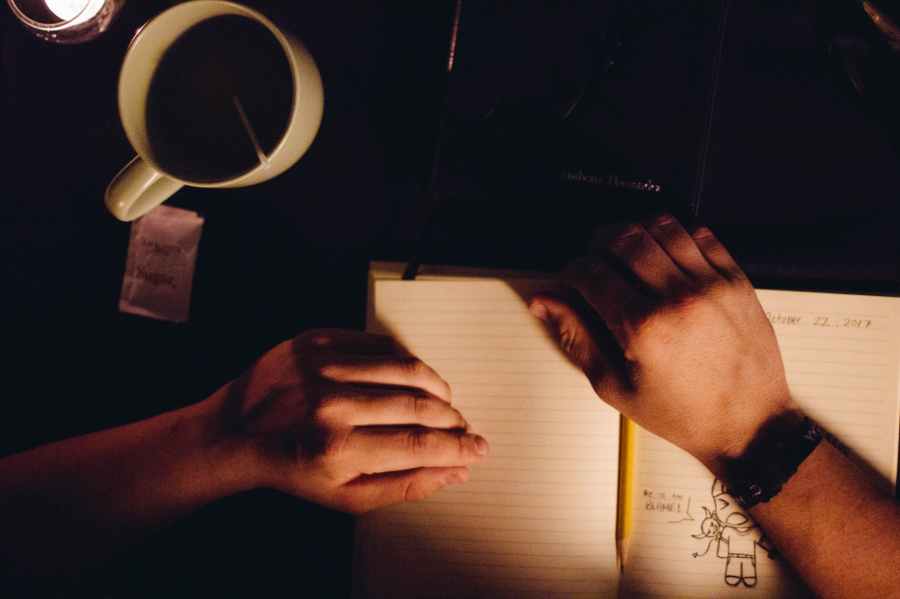 I’ve spoken before as an advocate of Wm S Annis’ suggestion of using a diary as a conlang creation tool. Below I copy and analyse a fairly bog-standard entry from my journal.

Fá hó yé nijá tipót já?
what pass ant do today 1sg
What did I do today?

Qári exhibits wh-movement, and the movement of the question word fá ‘what’ to the subject position in turn triggers a voice alternation. More literally, one could translate this as “what was done by me today?”

Elsewhere, I describe the particle yé as an anterior marker, and state that Qári marks relative rather than absolute tense. I should really change that, as in normal usage I tend to use yé in the first sentence or so to indicate that the “deictic centre” of the following discourse is in the past, with the following clauses unmarked for tense.

The verb intyásuye is reflexive (marked by the prefix in-) and telic: I was successful in waking myself up.

Qári only has seven “basic” prepositions, which I normally gloss using case abbreviations: xe is one such, which I gloss as locative. Finer distinctions are indicated with “compound prepositions”, made up of a simple preposition followed by a possessed noun phrase: in this case ‘at the eye of’ indicates ‘in front of/before’.

The following two clauses, yengki rinetse and oni tabakó are lacking subjects and marking for telicity: were they to stand on their own, I would mark them as telic because I finished making the coffee and smoking the cigarette. However, when clauses are chained like this, the marking of the first clause in the chain can be assumed for the others: so the subject here is understood as já ‘I’ and the verbs are understood as telic. If I wanted to say (for example), that I woke up and I was making a coffee (i.e. did not complete the action), the subject would have to be restated and thus “reset” the chain: já intyásuye, já yengki rinetse.

Note also the conjunction qeyó: this is used to join two clauses, two phrases are joined by qe, as in rinetse qe tabakó ‘coffee and cigarettes’.

Qári tends to be more exact with its verbs than English: one doesn’t fála ‘make’ coffee, one has to yengki ‘boil’ it instead. The word for coffee here, rinetse, strictly refers to any non-alcoholic drink made by boiling parts of a plant or adding boiling water to the same. It also works for tea, but in my journal it typically refers to coffee as I don’t really drink too much tea (unless it’s rinetse qehat ‘mint tea’). Plants of the genus Nicotiana are lacking in Ukxár, so tabakó is a simple Qári-isation of the English word tobacco.

Here we have a compound verb construction: tika saksu literally means ‘take wash’. The verb tika ‘to take’, when used as a vector verb, has an autobenefactive sense: I did the laundry for my own benefit. Note how the inanimate telic marker –yó agrees not with já ‘I’, but rather with my clothing, ésiyatxe.

Possession in Qári is relatively complex, and the normal way of expressing that you don’t have something is to say that it is lacking to you. As I’m the most animate participant in this, I get to be promoted to the subject. This means that the applicative voice is triggered on the verb, indicated by the clitic ‘m.

The Qáritu don’t wear underwear in the same sense as modern Terrestrial westerners, so in this case I’ve just used the closest equivalent to talk about my pants. Note how the plural marking is not on the head, but rather on the attributive adjective: in Qári noun phrases the plural marker generally migrates as far to the right as it can.

The verb jira ‘to meet up with’ is intransitive in Qári, the logical “object” being introduced with a comitative phrase here. We can also see the phrase áda yejitxe for ‘pub’ here, which I believe I used in a Lexember entry.

The normal verb for ‘to drink’ is itlá. However, here I’ve used yepu ‘to swallow’, which has a connotation similar to English “quaff”, or perhaps “to sink”, in reference to beer. The use of yetsit ‘jar’ for beer here is an example of metonymy, of course: yetsit yejitxe for ‘a glass of beer’ is pleasingly alliterative, which makes me think that it works well as an informal term.

Another compound verb construction: here the vector verb diyi ‘to fall’ indicates that the polar verb happened unexpectedly and to the detriment of the subject (i.e. me and my friend). Unlike jira, the verb eqá indicates a chance encounter rather than a planned meetup, and is a transitive verb. The adjective paxéxáhat ‘dispiriting’ is derived from the verb paxéxá, which in turn comes from the privative prefix pa– and xéxá ‘to encourage’. Here we have an agentive participle formation, which is marked as definite because it stands in attribution to a proper noun.

Like most verbs indicating emotional states in Qári, hága ‘to hate’ casts the experiencer as an indirect object: thus when promoted to subject the applicative voice is again triggered.

Qári lacks deictic determiners like English “this” and “that”. Instead, it uses a definite noun followed by a clitic indicating deixis (a construction taken from the Celtic languages and, if I’m honest, I tend to overuse in my conlangs. A fringe benefit of not having English as your L1 is that when you just import a feature from your native language into your conlang without thinking about it, it’s not quite as obvious.)

So, my journal entries tend to look rather like this: short and banal in translation. However, I hope that I’ve indicated that each entry helps me to refine my conlang, thinking about usage and constructions, in a way that just writing a grammar and translating the Babel text simply won’t.

What I'm writing about

The final #qariglyph in this series! It will also be the last for a little while as I am trying to work on getting a grammar sketch of the #qarilanguage into a publishable state...
The penultimate #qariglyph of this series is 𝗼́𝗽𝘅𝗮 “wool” #conlang #qarilanguage
Linguizone

Languages, linguistics, and anything else

Worldbuilding, Conlanging and Other Stuff